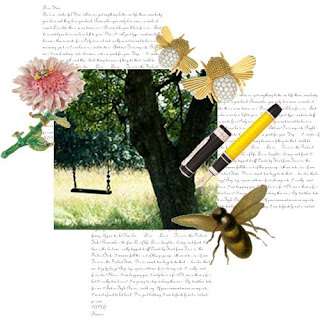 Last Sunday my writer’s group tried something we hadn’t done for a long time: freewrite together. Because I keep files of “word prompts” and pictures for freewriting at home, it was easy for me to bring both to the group. Just before I left home I chose two at random: the phrase: “Requires no lessons” that I paired with a photograph of a hand holding up to the sunlight a honeycomb shaped like a Grecian urn.

We gave ourselves exactly thirty minutes to write in silence. Afterwards we read our writing aloud and as always when we try this, I was stunned by what we accomplished in such a short time.

Other than with group members, I don’t usually share my unedited, unpolished, and very repetitive writing, but today I want to take a risk and include you in the group. The following is what I wrote raw, ignoring my ice coffee and using my favorite fountain pen:

This much I know about bees: The bees require no lessons on honey-making. It’s just something they do like breathing or swallowing. They are raised from the larvae stage by grown, adult worker bees who buzz and hum over the bee nursery, feeding them pollen, fanning them with their wings, singing them bee lullabies for all I know. The tiny bees mature in their wax cells, growing in golden light, their entire world a place the color of honey; their early lives are bathed in sweetness. They dream unaware of the harsh battles their queen endured to bring them to life. The queen is their mother and she is aeons apart from them in her uniqueness, her special status as royalty. When they emerge full-grown, they are made of honey, it is in their bee blood, it is in every cell of their bodies. The first thing they do upon seeing daylight is to fly outward, away from the hive to collect the ingredients to make more honey. Freed from the responsibilities and trauma of queen-hood, they simply fly out of the hive and return to the hive, making honey, raising more young in their own turn and time. There is no question of “how” or “why.” They live the ultimate bee-ingness of bee-ness. The only thing that is ever asked of them is a willingness to defend the hive, to sting an intruder and to mysteriously accept that to attack and defend is to die. The stinger, once used, pulls from their bodies and leaves an irreparable, incurable wound.

Once, and only once, I was stung as a child by a bee. I was about eleven and I was in the backyard of our house in the California San Fernando valley. My parents had purchased the house because it was the only one on the street with mature trees still on the property. The housing development had been carved from farmland, the old farmer and his wife still lived in the original farm house that backed onto our yard. Perhaps that’s why the elms and mulberries, the figs and apricots had been left intact. In a shift from open plowed fields they had been the survivors of a sale that may have made the farmers a small fortune but was also the beginning of why the San Fernando valley today is an expensive, over-crowded and uncomfortable place to live. The last trees were however in our yard alone, and their blossoms, I am sure, attracted the bees. I was never afraid of them, never was one to go , “Oh, bee—help!” and I would never dream of hurting one. Yet the day I stepped on a bee and it stung my toe, I can still remember the excruciating pain and the horrible sight of the bee separating from its stinger; the bee dying slowly, the stinger lodged in my toe, the bee throbbing and finally quieting, the bee dying and my terrible guilt and my terrible pain. I don’t know how long it lasted. I pulled the stinger from my foot; my mother made a paste of baking soda, her cure for everything. When it was over she went back to her book and I hopped one-legged to the darkened living room where the drapes were gold silk and the entire room was the same color as the honey I imagined the bee producing and the same color as the pollen I remembered coating its furry legs. The entire episode seemed yellow to me. The sting was not as severe as I would have thought it could be. I suppose I quickly forgot it, read a book of my own, was forever more careful walking through summer grass in bare feet. What did I learn that day except that life was arranged strangely, that bees could die simply for drawing their swords in self-defense?

It required no lessons to observe that life went on in my house no different from the day before: my one-year-old brother crawled and chewed his way through the house; my mother hid in her room and read library books; my father demanded ironed socks; and the gold drapes gave the impression the house was bathed in honey. If only that had been true. If only we were born without stingers, and if only we had the kind that could only be used once.

Pain requires no lessons; kindness rarely comes naturally. The bees manufacture honey and we manufacture problems more complicated than the multiple cells of the hive. For a long time I have wondered what is the difference between humans and animals, humans and insects, humans and anything else at all. And this I think is the difference: we require lessons, we cannot make honey on our own. We are too smart, too dumb, too helpless to do anything but learn, again and again and again until we come up with honey and still we ask: “Where the hell did that come from?”

Thought for the day: What in your writing “requires no lessons”?
Posted by Valerie Storey at 11:37 AM 1 comment:

In My Dreams I Write in Paris (but I Really Went to Frankfurt...) 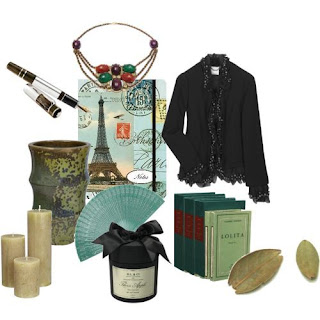 For as long as I can remember, I’ve had this image of me writing in the perfect Parisian café: outdoors on a little street fragrant with coffee and budding chestnut trees. I even know what I’m wearing: a tan linen skirt, leather sandals, an orange silk top and a straw hat. My journal is brown leather and I’m using a smooth-flowing fountain pen just like I do in real life. Whatever I’m writing, it’s profound. Serious. Deep. It’s writing-that-matters. Better yet—it’s already contracted to be a best seller! As I write I see a group of little boys playing soccer nearby. The ball rolls close to my table. I smile, unconcerned at the interruption. I toss the ball back; I sip the coffee I just ordered. It’s a warm, sunny day and the words are unstoppable. I breathe in the image, feel it, believe it. So how come I still ended up in Frankfurt?

In my day-job I work with my husband, Dave Storey, and his company that makes his patented line of guitar picks. And every year, the world’s largest music trades show is held in Frankfurt, Germany. So well-prepared with lots of warm clothes, throat lozenges (you do a lot of screaming over the noise at music trade shows), and for some crazy reason my latest manuscript (I thought I would be bored and would have all this extra time to write. Talk about dreams…), I dutifully followed my husband through acres and acres of booths displaying everything from the latest in electric guitars to the hot new trends in accordions and xylophones. (Yes, my hearing is still bad. Very bad.) By the end of the week, totally exhausted from covering what felt like thousands of miles of pavement and stairs; bored with my de rigueur and funereal wardrobe of ubiquitous black clothing; and a little overwhelmed by the starkness of a big industrial city poised between winter and spring, I wondered why on earth I ever thought travel was a desirable occupation.

Maybe it’s because I actually had a good time. Despite the non-stop meetings and hurried rush to get to all our appointments with distributors, there were wonderful moments I’ll never forget, such as stopping at the exquisite Faber-Castell pen store and buying a set of pastel pencils, and later going to an orchid show at the Botanical Gardens the Sunday before we flew home.

Now, two weeks later, recovering from airplane flu and finally figuring out which manuscript is going to take precedence for the rest of the year (not the one I took with me), I’m writing again not in Paris or Frankfurt, but in Albuquerque, New Mexico. I wear jeans and turtlenecks, my coffee is homemade. I do have the fountain pen, but find I’m using it mainly to journal; my Alphasmart is much better suited for the manuscript that isn’t exactly profound, but makes me excited enough to want to follow my new set of characters deep into my much-needed sleeping hours. And the pastel pencils are wonderful; I can’t wait for the weather to be warm enough so I can take them sketching in the park. And if that isn’t enough, I can always pretend I’m in Paris wearing my straw hat. The imagination has no borders—why should I?

Tip of the day: Where do you wish you were writing right now? Envision your “perfect” writing environment and see what happens. No matter where you are, you can always bring an element or two of that perfect place into your current writing nook.
Posted by Valerie Storey at 6:55 PM No comments: