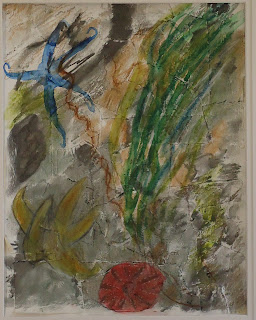 Until a few weeks ago, I always thought #CampNaNoWriMo was in July. Then, thanks to a stray tweet I happened to spot mentioning it was also in April, well, my course was set, and here I am: once I hear of a writing or art challenge, that's it, I'm lost. I HAVE to participate.

Despite having written with my cabin mates a couple of years ago, I wasn't very well prepared for camp this time around. No sleeping bag, no name labels sewn into my clothing, not even a bag of Fritos for late-night snacking. Suddenly it was April and I had to show up at the blank page with a rather hazy idea and not much else.

Fortunately, CampNaNoWriMo isn't anywhere near as stressful as November's 50-thousand-word-novel-in-a-month ordeal. At camp you're expected to play. You set your own rules and goals, write in any format or genre of your choice, from screenplay to memoir, or you can even go for a full novel if you so desire. For me this freedom translated into the decision to go down a strange path of my own invention: 50 pages of narrative prose poetry handwritten into a journal with collage on the corresponding pages.

My title for this project, The Seaweed Collector, was inspired by a photo on Pinterest of an old nonfiction book of the same name. When I saw it, all I could think of was: Who is the Seaweed Collector? What does he/she do? Where does he/she store all that seaweed? How many kinds of seaweed are there to collect? After some research I found that the original book was printed in 1923 and is actually an encylopedia of British seaweeds. Because it's in the public domain now, you can buy what sounds like a photo-copied reprint on Amazon. com.

At first I was worried that this side trip was going to detract me from my daily page quota on my current WIP novel, Ghazal. But then something interesting happened; I realized that I wanted to add pages and lines from this new work to my novel, making them all part of a mysterious "book within a book" that the characters read, pass on to each other, and that changes them all in some way. Needless to say, I'm pretty excited about this development. I'm also grateful that I haven't just gone running after some time-wasting diversion that keeps me from my "real work." Now to go build my blanket fort. . . . Catch you next time.

Tip of the Day: A fun way to start any new project is to borrow the title of an existing book, especially one that's fairly old, or out of print, and that nobody could possibly associate with a well-known narrative such as Gone With the Wind, or Peter Rabbit. You don't even have to buy the book; browsing the library or a used-book store should give you plenty of fresh ideas!

Posted by Valerie Storey at 12:02 PM No comments: 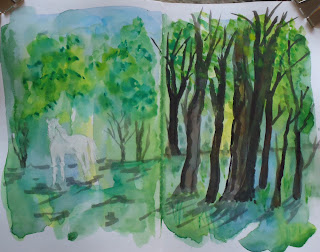 This year I'm once again helping to organize the Enchantment Show here in Albuquerque, a local art and writing event presented by the New Mexico chapter of the Society of Children's Book Writers and Illustrators. Basically, the show turns the usual way of producing a children's picture- or story book on its head: instead of a writer submitting a story to a publishing house and then the house assigning an illustrator to produce the pictures, we invite illustrators to paint or draw to a theme (this year it's Serenity) and then assign writers to write the accompanying stories. It's an awful lot of fun for everyone involved, and my main job is to match the artists with their writing buddies and to make sure everything is ready for our show deadline of June 1.

What this has to do with today's post is that I've been inspired to take this same approach to my own work-in-progress picture book, The White Pony, a project that's been dear to my heart for, gosh, a couple of years now. My title and inspiration comes from a book of Chinese poetry I bought decades ago for the grand sum of 25 cents at a Friends of the Library sale in Carrollton, Georgia. Most of the poems are hundreds, if not thousands, of years old, and some of the best poetry I've ever read. When I took my first splash ink class with artist Ming Franz, the friend I traveled to Taiwan with, I immediately thought the work I created with her was perfect for illustrating fairy tales. And that lead me to think of The White Pony and how I could turn it into a children's picture book.

Ever since then I've been working hard to "play" with splash ink or splash color techniques and learning to draw horses. Some days I feel I will be learning to draw horses for the rest of my life, but that's also how I feel about all my artistic endeavors anyway. Which is how all this relates to the Enchantment Show.

For a long time I thought I had to write my story first, and it wasn't easy. I didn't know whether I wanted to just illustrate some of the poems, or write some complicated story about a princess who wanted a pony, or a boy who wanted to find a pony for a princess, or a pony that wanted to find a pony friend . . . and on and on and on until I was totally blocked. The one thing I did know is that I wanted to paint the pony and his environment, but I just didn't know what to do with him as far as a story went.

Several months ago I decided this wasn't getting me anywhere fast and that what I really needed to do was follow the example of the Enchantment Show: paint first, write later. I've never been happier with a creative decision.

To experiment with ideas for my illustrations, I worked in a small Stillman and Birn sketchbook, plus used some larger sheets of multi-media paper to create thumbnails and to lay out color palettes for how I would like the finished book to look: 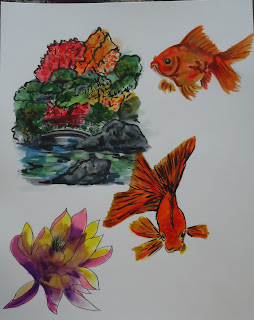 There will be goldfish! 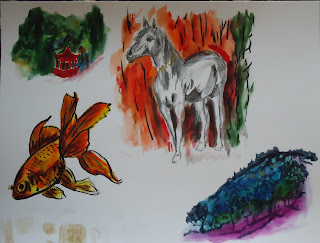 And even a pony eventually! 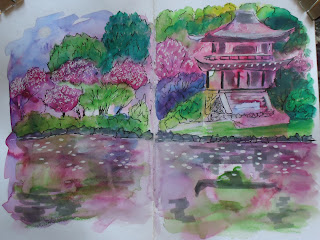 I do know the changing seasons are going to be part of the story too. Here we have Spring. 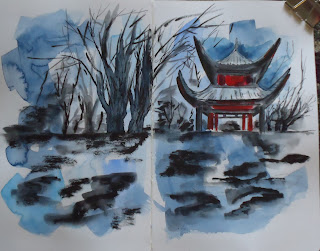 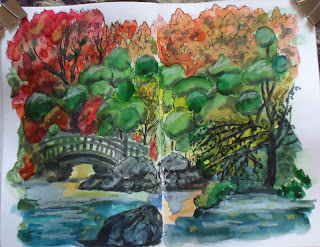 My main method of starting the sketches was to simply lay down random watercolor washes throughout the sketchbook and then try to "see the pictures" in the washes. The technique is very loosely based on the Chinese splash ink tradition, and one that matches my way of writing based on random prompts, whether it's for my art journal or a full-blown novel.

Now that my sketchbook is filled though, I'm gearing up for Phase II: good paper! Final drafts! Let's paint those ponies for real! After that, well, hopefully I'll come up with an actual story. But for now, I'm letting the illustrations guide my imagination. As the saying goes, somewhere in all that manure there has to be a pony, right? Draw it and the stories will appear. Yes.

Tip of the Day: How can the concept of "pictures first, write later" help your own writing project: screenplay, poetry, memoir, or novel? Keep in mind that you certainly don't have to draw your own--just a handful of magazine cut-outs arranged into an evocative sequence are often more than enough to jump start a multitude of WIPs!
Posted by Valerie Storey at 11:22 AM No comments: