Book Review: Not Dark Yet, by Berit Ellingsen

I don't review a lot of books, but when I do it's because I really want to--I want to share something important and real that I think other writers and readers will enjoy and benefit from. That's why I'm  taking a look today at Not Dark Yet by author Berit Ellingsen, a writer who has enriched my world and inspired me to keep writing, keep striving, keep going, and always take the time to read a good book.

I first heard about Berit via Twitter, the best source I know for discovering books and authors I wouldn't usually have the chance to learn about. Thanks to so many bookstores disappearing from my neighborhood (three more have just gone bankrupt this past month), social media has become my primary source for literary browsing, and when I read a post about Berit and her collection of short stories: Beneath the Liquid Skin, I had to order the book, pronto. Nothing in my extensive reading life had prepared me for the power and originality of those stories, so naturally I couldn't wait to read her novel, Not Dark Yet. I don't think anything else I've read before or after can compare with either of these books.

Berit lives in Norway, and her work reflects a beautiful sense of place, an isolated starkness that is in direct contrast with much of my own experience. Even desert-y Albuquerque doesn't have the sharp, cold lunar feeling I get from her descriptions. Coupled with this strong geographic presence is a staggering sense of precision to every word she writes, an exactness that has me re-reading many of her sentences for the sheer pleasure of it. In many ways I consider her a "writer's writer" and after I finished reading Not Dark Yet I sat down with my journal to examine what it was that made me love this book so much. Here goes:
So with all that said, I think I have to read the book again. Not Dark Yet is quirky, original, and packed with secrets--the kind you can't wait to unravel and sit with for a long while after. I found the book extremely compelling and one that has stirred my curiosity and desire to learn more, write more, and even try my hand at some fan-art. Highly recommended for readers who enjoy an authentic book of ideas and a serious voyage of self-discovery. Five stars from me--six if I could!

Tip of the Day: Be sure to check out Berit Ellingsen and her wonderful books. After all, to a writer it's love and reading that makes the world go 'round!
Posted by Valerie Storey at 12:21 PM 3 comments:

Pushing Past the Middle 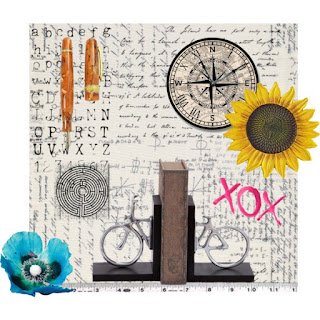 Writing a series of poems based on my trip to Taiwan last year wasn't on my 2016 to-do list. It really wasn't, but now that it's appeared, I can happily say I've battled through and my first draft is well and truly finished. Yay!

That said, it wasn't an easy journey, especially when I reached a place several weeks ago where I was well and truly stuck: right smack dab in the middle. I was uninspired, tired, and beginning to worry that the whole project was a major distraction and a waste of time.

Reaching the middle of any project rarely feels like a victory. Instead, all I can usually think of is how much more work I have to do to finish. So when I found myself in the middle of A Taiwan Sketchbook (my working title) rather than writing the second draft of my new novel, Ghazal, I suddenly realized how long it had taken me to get to where I was, and how much more effort I had to put into the project before I could type THE END. Just thinking about all those hours of work ahead of me sent me to the couch and a headache.

While I was lying there, feeling both guilty and utterly defeated, I thought of all the stages of my project that had brought me to where I was, starting with my GRAND IDEA:

The thing about all this, however, is it's happened to me so often it's nothing new. I know in advance that there will always come a day in my writing when resistance looms large, quitting sounds wonderful, and I'd rather be reading or painting. I've been on that same couch with the same headache so many times before, and yet, guess what? I've always started writing again. Here's how you can too:

If you've tried all this, though, and do discover that your heart truly isn't in a project, give yourself permission to stop, maybe even quit. Don't toss any of your work, but simply put it away and move on to something new. And if you find yourself missing the project at a later date, but you're not sure how to re-start it, evaluate what it was that kept you from continuing. Was it your choice of genre, voice, or style? Were you being too ambitious and trying to add too many (and superfluous) elements to your story-line? Were you trying to please readers rather than yourself? Spend a few days journaling about your situation and then see if things are really as bad as you thought they were. With any luck and a lot of determination you should be able to find some valuable solutions.

Tip of the Day: Stuck in the middle of your WIP? Brainstorm! Create a list of 100 new "what-if's" and scenes. See which ones can inject fresh energy into your manuscript. And always keep in mind, once you've passed "the middle," it's all downhill from there!
Posted by Valerie Storey at 9:31 AM No comments: