Writing With All Five Senses 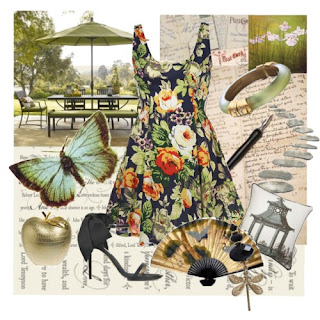 .  The story is set in 1904 England and the Brazilian rain forest, and inside the front cover there are eleven review excerpts.  Starting from the top, some of the key words repeated throughout the reviews are:  sensuous, lush, luscious, and exotic.  Other reviews use the terms: rich, evocative, opulent, sultry, seductive, and rippling.  (I do like rippling.)

Lush, luscious, and yes--rippling--writing is a worthy goal for all of us, I think.  Even if you're writing "just about your own backyard" miles away from the Amazon or London's Richmond Park, there's no reason to make it dull.  Pull us in; help us to see, hear, taste those motor mowers and dandelion puffs.  In other words:  all five senses, people!

To really get those senses moving, we need to go beyond mere description--we need to associate the senses with the power of emotion and memory.  For instance:

1.  Sight.  Sight is the sense we most commonly turn to when adding description to our manuscripts, and it's the one most certain to trip us up and bore readers.  You know the sort of thing: there was a gray rock on the cement steps only inches away from a brown stick covered in mud. The mud looked dirty.  But let's ramp this up a few notches:  the rock, a chunk of brain-shaped coral, could be covered in blood because it has just been used as a murder weapon, instilling terror in your main character when she stumbles over it on her way to deliver a cake for the victim's birthday.  The rock could also be very unusual--a vivid shade of purple, and similar to one she's seen inside her new boyfriend's aquarium.  Seeing the rock now means something; it starts a chain of action, reaction, emotion, and future plot twists.  It's also a very unforgettable rock because of the color, the blood, and the association with a brain, and it sets a tone unique to the story.

2.  Sound.  We live in a world of noise that can sometimes be overwhelming, forcing us to tune it all out--much to our disadvantage.  An excellent exercise is to sit with your journal and listen, really listen, for 5 to 30 minutes and then record what you hear.  Do this for your characters too.  Imagine them in their individual settings, and then listen along with them to whatever is intruding on their environments.  Whether it's a string of Gregorian chants or the sound of a jackhammer three streets over, make it important to your character's well-being or distress.  Make it real.

3.  Touch.  The way particular items feel to your characters can add volumes of emotional reaction and involvement to your writing.  A scratchy collar, a much-washed baby blanket, the sting of a wasp, the weight of a good book in your hand.  We've all been there.  Let your characters experience their story world in as tactile a way as possible, showing, rather than telling, why they prefer the feel of one item over another.

4.  Taste.  I enjoy descriptions of food, not just for the ingredients or how to put the recipes together, but because of the combination of mood and memory food writers seem to excel at.  I've mentioned before how helpful I find food magazines to be for found poetry and collage work precisely for the sensuous language contained in the articles.  But taste covers more than food.  How about the taste of rain or snow, a barely detected poison, or the taste of a lead pencil--the one your main character is chewing on throughout his four-hour math test?

5.  Smell.  I hope this isn't too much disclosure, but my favorite smell in the entire world is kittens' feet.  I think kitten paws are the sweetest, prettiest little things ever.  Katherine Mansfield described them in her journal as "unripe raspberries" and I've always considered that description right-on perfect.  One reason I love them so is they always make me a think of a little white and orange kitten I wanted as a small child and couldn't have.  Wah!  That kitty smelled delish and I've never forgotten.

Tip of the Day:  Make two lists:  one with your favorite sights, sounds, touches, tastes, and smells, followed by your most disliked items in these same five categories.  Once you have your lists, freewrite on why you love/hate these things, what they remind you of, how empty your life would be without them.  Now do the same for some fictional characters, either from your current WIP or a brand new story.

Breaking News:  Next Tuesday, May 24, 2011 Young Adult author Holly Schindler will be guest blogging right here at Dava Books.  Holly has written a special post, plus she'll also be sharing a writing exercise.  To celebrate, we're having a super giveaway--a copy of her new novel Playing Hurt

, accompanied by a copy of my how-to-write book, The Essential Guide for New Writers, From Idea to Finished Manuscript

.  Details of how to win will be revealed next Tuesday--don't forget.  In the meantime, keep those words rippling!
Posted by Valerie Storey at 3:01 PM

I would suggest remembering the sixth sense, Valerie. No, not ESP (I knew you were thinking that!)--the sixth sense that everyone has. Called variously "kinesthesia," "proprioception," etc., it is a person's sense of the movement and relative positions of their body. It is not the same as the sense of touch. When the airliner accelerates and lifts off, touch only provides your character with information about such things as the texture of the armrest under a hand and the nagging wrinkle in the character's underwear. The kinesthetic sense gives the character the sensation of being pressed backward and down and also the locations of body parts--head, limbs--relative to all the rest.

You wouldn't want to write about this sixth sense often, or for all characters. I think it is useful for closing narrative distance and/or when a character is in a tight corner, because it reveals what the character is sensing about the world that begins on the inside of the character's skin, a world that is intensely idiosyncratic and private.

Nice article, thanks for the information.

I really liked this part of the article. with a nice and interesting topics have helped a lot of people who do not challenge things people should know.. you need more publicize this so many people who know about it are rare for people to know this... success for you.......!

Thank you so much! Appreciate your visit :)